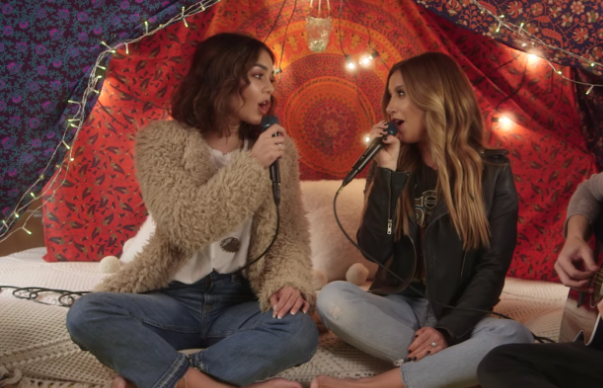 It’s A High School Musical Miracle: Vanessa Hudgens And Ashley Tisdale Team Up For Their First Duet Ever! Watch The VIDEO Inside!

The stars of High School Musical will always hold a special place in our hearts. They’re like old friends. You want to follow their life, see who they’re dating, where they’re working, if they are are having children, etc.

Thankfully, most everyone from the cast is still getting steady work in Hollywood, so it hasn’t been hard to keep track of them.

Ashley Tisdale may not be having a lot of mainstream success at the moment, but she is keeping busy. For those who don’t know, the 31-year-old actress/singer has a series on YouTube titled, Music Sessions. She films herself covering the hits of today, and sometimes she will bring in a special guest.

On her most recent episode, she brought in someone very special. A guest that her fans have been begging for. Vanessa Hudgens joined Tisdale and the two BFFs covered Elle King’s Ex’s and Oh’s.

And believe it or not, this is their first duet together. They never sang as a duo in the High School Musical franchise, so this is a real treat for HSM fans.

I think the creative team behind the movies missed a great opportunity here. Their voices blend perfectly together and they seemed to be having a lot of fun. If they had the right song, they probably would have killed it as a duo in HSM.

If you want more of Tisdale, check out this video below. She and her husband covered Paramore’s Still Into You and it was fantastic.