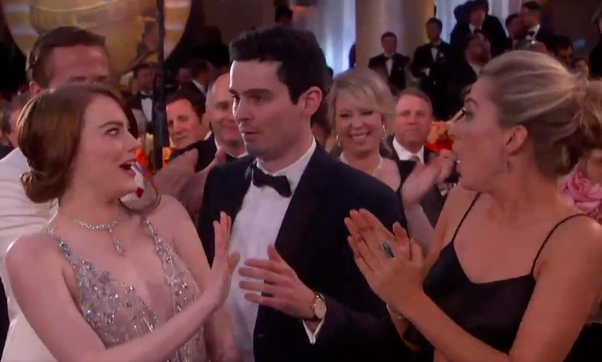 Watch The Most Awkward Moment At The Golden Globes: Emma Stone’s Hug Attempt With La La Land Director And His Girlfriend…YIKES! (VIDEO)

La La Land was the big winner last night at the Golden Globes. The modern (but also classic…whaaat?) musical broke the record for the most Golden Globes won by a single film, which shouldn’t surprise anyone. It was a decent film, starring Ryan Gosling and Emma Stone, and it was a love letter to Los Angeles.

That’s the perfect recipe for success during awards season.

And with the biggest award show still to come next month, the cast & crew of La La Land better figure out this hugging situation. The director/writer of the movie, Damien Chazelle, won Best Screenplay last night, and before he walked to the stage to accept the award, he had to take congratulatory hugs from everyone at the table.

The first hug with Ryan Gosling was a success, but things got pretty awkward after that. As Chazelle went to hug his girlfriend, Stone awkwardly joined the hug.

And she knew right away she had made a mistake, “That was weird, I’m sorry.” she said to both Chazelle and his partner.

She played it off well by immediately admitting how strange it was. That’s the key to all awkward things in life. If you’re the one to admit it was weird, then that takes away the embarrassment.