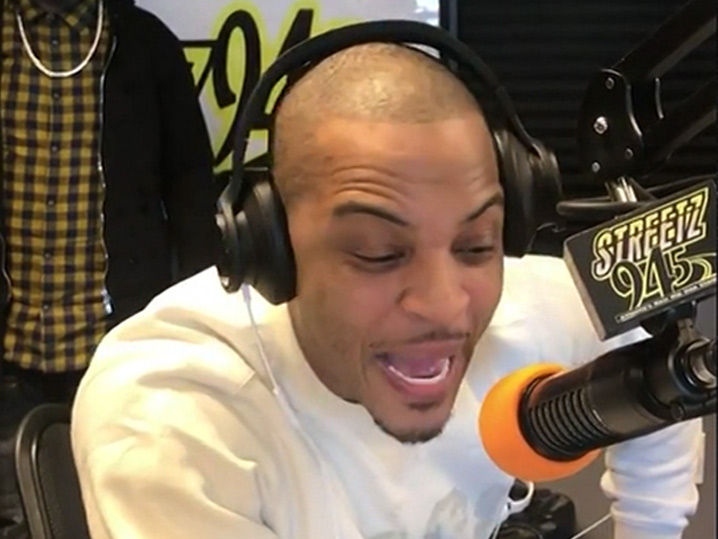 T.I. Shuts down Yung Joc when Asked about his Relationship with Tiny Live on Air. “It Ain’t Your Business” (Video) That’s ironic. We all know by now that Tiny filed for divorce the week that the video of her dancing with Floyd Mayweather surfaced. That was her defense to the bump and grind at the Mayweather palace and the lies that she told afterward to cover it up.

In case you forgot….

After the filing went public, we heard rumors that she only filed to scare T.I. and that the two were actually working it out. This seemed like the likely scenario and everyone sort of left things alone, thinking that the relationship would continue it’s status quo. T.I. has been cheating since day one and no one has ever had a problem with it, why start now.

DIVORCE RUMORS BACK ON AFTER TI CAUGHT WITH MYSTERY WOMAN

Yep. That happened. A video surfaced of TI with a mystery woman to which TI took to Instagram and replied with this post. I’ll take Big Business over this lil Bullshit any day…. Get ya shit straight & Keep it that way.
#USorELSE #ItsaLifestyle #MySauceRunnithOver @hideokibespoke

That brings us to the interview with Yung Joc. On his radio show, Yung Joc basically asked the rapper what everyone wants to know,

T.I. got real serious and shut the entire line of questioning down.

I know we’re on the air right now, and I’m telling you, it ain’t your business.

However that didn’t immediately stop the situation; they continued to press and things got slightly uncomfortable.  Watch the clip:

T.I. and Tiny are worth more together then separate and with the future of their show hanging in the balance, they need to be careful how they spin their relationship to the media.  If their show were to resume right now, ratings would triple.   Although TIP says it’s none of our business, it kinda is, he’s made a living by making his private life public.