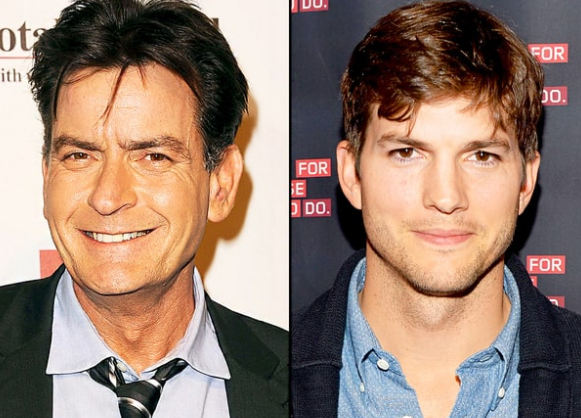 Charlie Sheen Regrets Being A Huge Dick To Ashton Kutcher, Admits He Should Have Treated Him Better Following ‘Two and a Half Men’ Drama Charlie Sheen continues to mellow out as he gets older. A few years ago, I was convinced he was the worst person on Earth, but now I’d say he’s only in the top 10.

As most of you probably remember, Sheen had a strange feud with Ashton Kutcher for several years. It all started when Kutcher replaced Sheen on the oddly popular sitcom Two and a Half Men. Sheen slammed Kutcher (and the show) every chance he got.

Back in 2014, Sheen told Kutcher he needed to stop “barfing on my old brilliant show,” which is kinda adorable because that means at one point Sheen truly thought Two and a Half Men was brilliant.

The 51-year-old actor had an interview with the Kyle & Jackie O show on Wednesday, and during the interview, he talked about how much he regrets his behavior.

“I was stupidly mean to him because I overlooked the reality and difficulty of taking over a show. Which I did, I took over Spin City when Michael J. Fox was too sick to work, but no one ever put those two together … So I should have been nicer.”

And Sheen is serious about his regret. He honestly felt bad about it, which is why when he saw Kutcher at a Dodgers game last year, he went up to him and gave him a hug.

“He was tasked with such an uphill struggle, and I was more into my own ego than I was aware of his own battle and for that I am regretful. It was awkward, but I made it fine because I felt bad for him. He thought he was going to catch a right cross, but I just wanted to give him a hug.”

How sweet. But we have to imagine there is a little part of Kutcher that still wants to say…