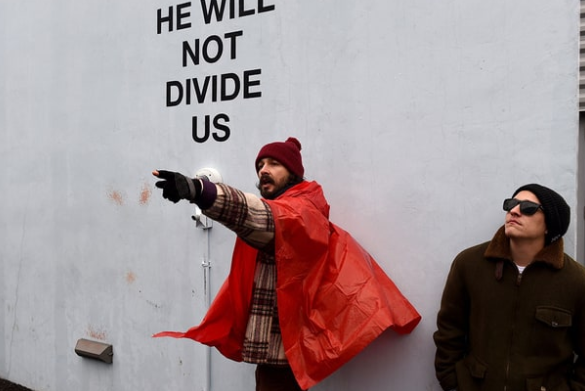 Shia LaBeouf Arrested For Assault During His Anti-Trump Livestream In NYC, We Got All The INTENSE Videos Inside!

As some of you may have heard, the 30-year-old actor has set up a protest against Donald Trump outside a museum in New York City. The He Will Not Divide Us protest is livestreaming 24/7 online and Shia plans to have it running 24 hours a day for the duration of Trump’s presidency.

There have been some interesting moments so far during the first week of the protest. The video you see above, which features Shia screaming a Trump supporter into eternal hell, has gone viral.

Shia almost lost his cool there. He came pretty close to assaulting the guy, but everyone escaped with zero injuries that day.

However, things changed yesterday when a man wearing a scarf walked up to the camera and said something that made Shia extremely pissed. The actor allegedly grabbed the man by his scarf and pulled him to the ground. That’s when cops moved in and arrested Shia.

Detective Pisano spoke to Us Weekly about the arrest:

“For whatever reason, Shia grabbed his scarf that was tied around his neck and head, and pulled him to the ground. The man was left with scratches on his face and red marks around his neck. He was charged with misdemeanor assault. He has been released but will have to appear in court at a later date.”

Shia has been arrested several times, so this is really no big deal for him. Just another day. In fact, we wouldn’t be surprised if he gets arrested a few more times during the protest.