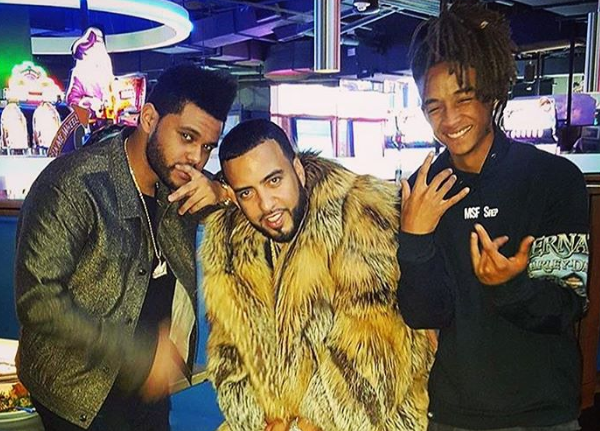 Selena Gomez And The Weeknd Make Another Public Appearance Together, And This Time They Brought Their Famous Friends With Them! (PHOTOS) All those people saying The Weeknd and Selena Gomez aren’t serious? Well, you might want to reconsider that. They took their relationship to the next level by having a fun date night with their circle of friends. Cameras spotted them hanging out in Hollywood at Dave and Buster’s until three in the morning.

Both Jaden Smith and French Montana were there with them, and sources say some of The Weeknd’s closest friends were there as well.

Insiders say Gomez and Abel looked “smitten,” and they weren’t afraid to hold hands or kiss in front of their group of friends. They even left the arcade in the same car.

“Selena looked so happy and Abel was very chill, very relaxed. They held hands as they left and it was very warm, you can tell they are really enjoying each other’s company…[Selena] seems very at ease with him and you can still see the stars in her eyes. They are clearly smitten!”

As you can see from the photo below, The Weeknd certainly looked like he was having a good time. French Montana posted the picture to his Instagram account, with the caption, “YOUNG LEGENDS #newboyband #shwag.” We’re seeing a different side of The Weeknd here. You’ll remember the first time he was spotted hanging with Selena, he looked kinda miserable, which made some people believe he wasn’t really feeling it.

It doesn’t look like that’s the case here. It’s time we start taking this relationship seriously. Although, sources did make it clear that they are taking things slow. They aren’t in a rush.

“They are taking things slow and getting to know each other. Selena was focusing on getting herself back together and The Weeknd was just getting out of a relationship [with Bella Hadid], plus putting out his new album. He thinks she [Selena] is extremely talented and sexy.”