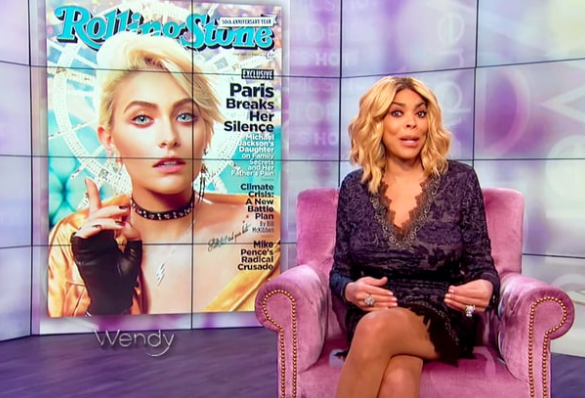 The haters are coming for you, Paris! Earlier this week we told you all about the interview Paris Jackson had with Rolling Stone magazine. The 18-year-old daughter of Michael Jackson revealed some pretty shocking things during the interview. If you’d like to check it out, click on this link.

She spent a lot of the interview talking about her father, of course, but she also talked about her depression and dealing with online bullies when she was younger. She tried to commit suicide several times, and it’s clear that even though she’s in a better place now, she still struggles with depression.

And you would think, since she’s just 18-years-old, most adults would refrain from making fun of her or talking sh-t about her interview. But not Wendy Williams. The 52-year-old TV host, who constantly craves attention, went on her show the other day and slammed Jackson’s interview.

She also found it hilarious that Paris considers herself to be black:

Williams also didn’t think Paris deserved to be on the cover of Rolling Stone. She admits her story was interesting, but she doesn’t believe Paris has earned the cover page.

“She has not made her mark on her own. You cannot be on the cover of one of the most prestigious … influential magazines in the world and just be the daughter of [Michael Jackson] and tell your story inside.”

Sure you can. It just happened. This would mean more if someone with actual talent said it, but “what have you done?” criticism coming from Wendy Williams is a freaking joke.