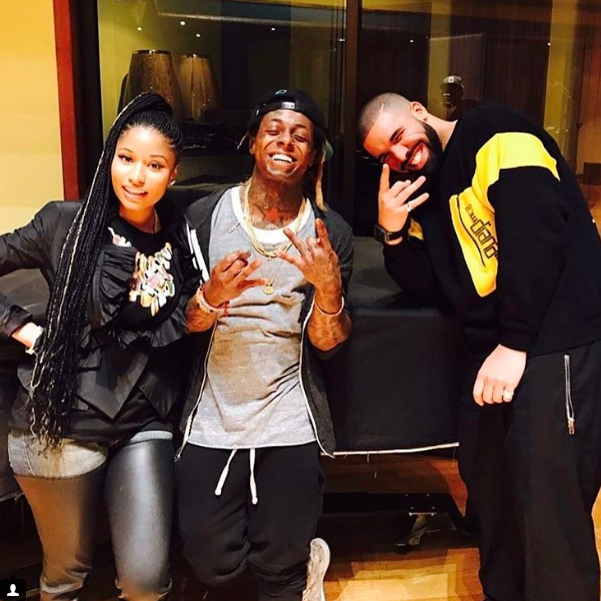 The Beef Between Nicki Minaj And Drake Is Finally Over, We Got The Reunion Photo And Details From Their Meeting! The beef that had been rotting away in the oven for two years has finally been removed and dumped in the trash. Nicki Minaj shocked her fans on Wednesday by posting the photo you see above, which shows her chillin’ with Drake like it ain’t no thing.

She didn’t caption the photo, but thanks to some insiders who spoke to TMZ, we know what went down before the photo was snapped.

According to the source, Drake saw an ESPN segment on January 8 featuring Nicki and Lil Wayne. That’s when he was like, “Yo, the Young Money crew is back?”

He picked up his phone and called label president Mack Maine to schedule a meeting with Nicki and the rest of the Young Money crew. Four days later, Drake jumped on a private jet and flew to Miami to meet with Nicki and Lil Wayne.

The photo Nicki posted was snapped during the meeting. No word on if they plan to record new music together, but this is certainly a step in the right direction. You’ll remember last April, Drake talked to Beats 1’s Zane Lowe about his damaged relationship with Nicki.

This was in the middle of his feud with her then-boyfriend Meek Mill:

“I don’t really talk to Nicki. Again, another person that I have a lot of love for and a lot of respect, not only for our past and how much work and time we put in, but even just the way she dealt with the situation [regarding Birdman and Lil Wayne] at hand. I understand what love is, and I understand a personal situation. She dealt with me how I would expect her to, which was with class.”

In addition to the photo at the top of this page, Mack Maine posted the photo you see below with the caption, “The Big 3! My family! I honestly missed this sh*t! Had to make em laugh to get that magic out! Ps Nicki take a 100 pics to get the one lol..da Queen –#2017 #Mula #UnitedWeStand—-#FreeC5”