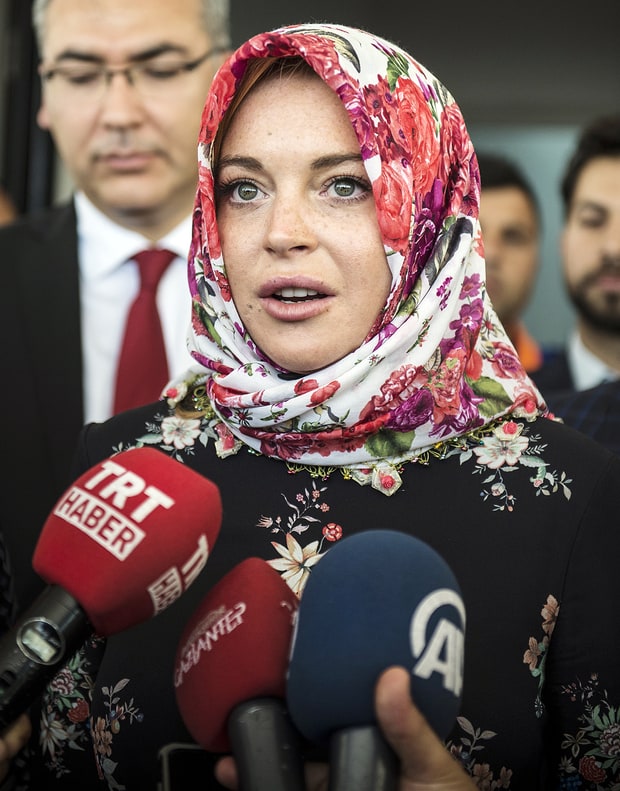 It wouldn’t be surprising to learn that Lindsay Lohan received some special attention at the airport. After all, she does have a messy history with drugs and has been sent to at least five rehab facilities. So yeah, it wouldn’t be too surprising if they pulled her off to the side to make sure wasn’t trying to fly high with some cocaine.

But that wasn’t the case during a recent trip to New York. The 30-year-old actress was on Good Morning Britain on Tuesday, and she revealed she was racially profiled at the airport because she was wearing a headscarf.

“When I was flying to New York recently, I was wearing a headscarf, and I got stopped at the airport and was racially profiled for the first time in my life. [The agent] opened my passport and saw Lindsay Lohan and started apologizing but said, ‘Take off your headscarf.'”

The incident was pretty upsetting for Lohan, but she can only imagine how scary it would be for someone else.

“But what scared me was that moment, how would another woman who doesn’t feel comfortable taking off her headscarf feel? That was really interesting to me. I was kind of in shock. It was strange. … I’m from New York, born and raised. I was a little intimidated.”

When this incident happened, Lohan was returning from a special trip to Turkey where she had a meeting with President Recep Tayyip Erdogan. She wore the headscarf out of respect for the country.

For those who haven’t heard, the actress has been studying the Quran, which has made people wonder if she converted to Islam.

“I think that me studying the Quran is something I found solace in. You can’t just convert to a religion overnight. Religion is a personal belief. My sister’s [Ali] a Buddhist. I don’t want to speak on something I haven’t finished yet. I find a solace in studying not just the Quran but meditation. The Islamic culture, I feel it’s a family to me.”