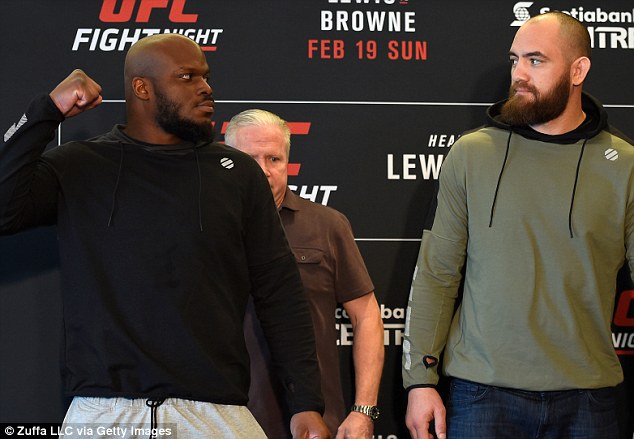 UFC continues to put on a show, and as long as there are personalities like Derrick Lewis, I don’t see that stopping anytime soon.

In one of the best post fight interviews I’ve seen in a long time, Lewis is in rare form.  A few seconds into the interview, he not only calls Travis Browne a wife beater, but also asks “Where’s Ronda Rousey’s Fine axx”.  After the devastating, come from behind victory, Lewis said,

“He calls himself a man, but he likes to put his hands on women. So, forget that guy. I got much more heart than he has.”

He also thanked the ref for letting him beat on Brown a few minutes longer than normal,

I appreciate it, Where he at? I’ll give him $1,000. I appreciate it for letting the fight go a little longer than it would, because I just want to get all my anger out on Travis’ face anyway, because he likes to hit on women. So I appreciate him for doing that.

The funny part is, the UFC cut that part out of their official posting of the post fight interview.

Here is part of the clip they removed.

Brown was once 16-1-1.  For a heavyweight in the UFC that’s amazing.  He switched training teams from the renown JacksonWink to the Glendale Fighting Club, a gym associated with Ronda.

Things started well and he won 2 out of three of his fight there. Somewhere during that time he and Rousey began dating and he would ultimately be trained by Edmond Tarverdyan, the same man who trained Rousey for her last two losses.  The results speak for themselves, Browne has lost 4 of his last 5 bouts.

Lewis, on the other hand is on a tear.  He has fought 8 times in the last 24 months.  As he said in his HILARIOUS post fight interview, he’s taking some time off.

Here is the full post fight interview in the ring, minus the UFC edited excerpts of the wife beating and Rousey references.

For the record, Browne was accused of domestic violence against fitness model Jenna Webb, who was his ex-wife.  The UFC did conduct an independent investigation and found inconclusive evidence.