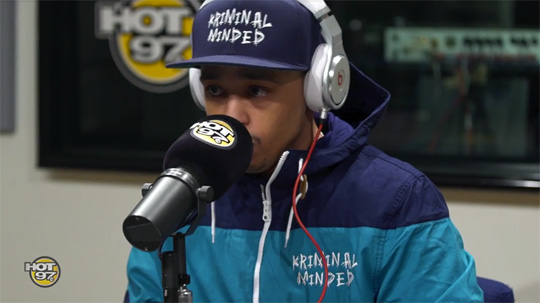 I know a lot of people can’t stand Flex but love him or hate him, he has some of the hottest freestyles posted online. Period.  Hot 97 and Flex are largely responsible for how NY and the Tri-state area consume hip hop and they have helped launched many careers.

When  you get on Hot 97 and Freestyle, it can make or break you.  Cory knows this…..and he came to SPIT BARS!

We all know Cory’s father Peter Gunz from Love & Hip Hop, but Cory has been slowly making a name for himself and I think its safe to say that he is one of the most anticipated artists in the game.

After dropping a few gems on us, he basically went into a hiatus, but emerged in a big way on Funkmaster Flex’s show this week.

Flex is usually screaming in the background as MC’s freestyle, this time was different.  He was literally left speechless as Cory went in HARD!

After about 3 minutes in, it looked as if Cory was going to slow down…..but instead he turned it up a few notches.  Really there is nothing more to say, I will let Corey’s BARS do all the talking.  Watch

BUT WAIT…THERE’S MORE.  DID YOU CATCH THAT MYSONNE FREESTYLE?

In case you missed it…just about a week ago.  Mysonne was on the mic and simply TORE IT DOWN.  His Freestyle in my opinion was even better then Cory’s.  It might be because Mysonne had that “Welome to NYC” beat.  It’s hard to mess that beat up, but Mysonne, beat the beat up!!