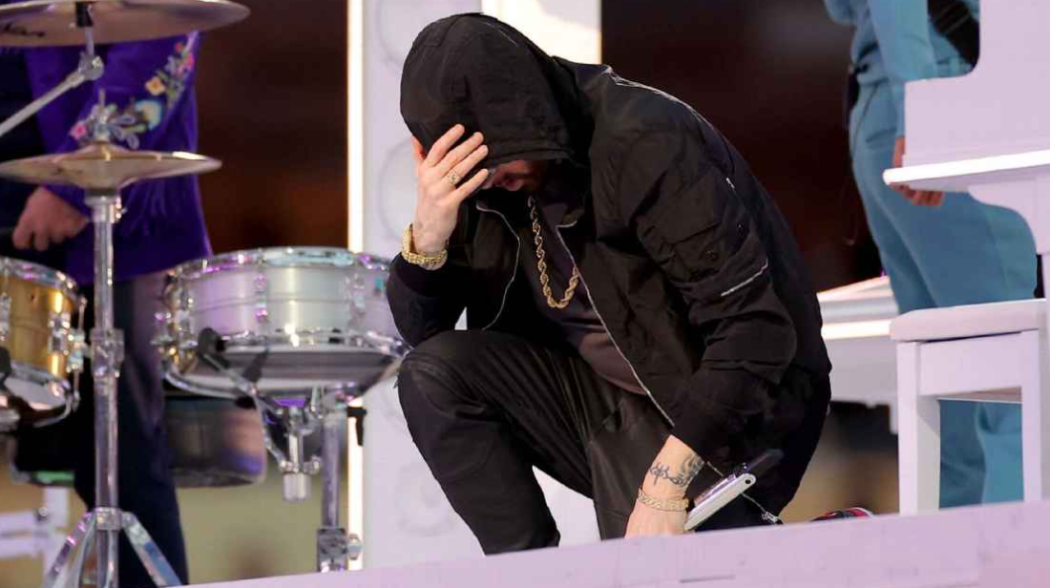 Eminem took a knee during the #SuperBowl halftime show

Well, Super Bowl 56 went down in Los Angeles on Sunday, Feb. 13. The Rams came back in the final two minutes to take home the trophy against the Bengals.

But as always, most of the talk after the big game was about the halftime show. This year, Dr. Dre teamed up with some of his favorite artists to put on a decent performance. You had Dre, 50 Cent, Mary J. Blige, Kendrick Lamar, Snoop Dogg, and Eminem.

I think, without question, Lamar’s performance was the best. It had the most energy, but a close second was Eminem’s ‘Lose Yourself‘ moment. After performing the song, Eminem dropped down to one knee with his head low, holding the position for around thirty seconds.

Many people believe this was in support of Colin Kaepernick, who was basically kicked out of the NFL for refusing to stand during the national anthem.

Artists from all over praised Eminem’s gesture, but some people wondered if the NFL knew he was going to do this. Some insiders claim the “higher-ups” tried to forbid the move, but a rep for the league claims they knew Eminem was going to kneel because they had watched the rehearsals.

We watched all elements of the show during multiple rehearsals this week and were aware that Eminem was going to do that.

Even with that response, they’re not saying they approved the kneeling, they’re simply saying they were aware of it.

It’s entirely possible they talked to Eminem, and he turned around and told them to kiss his white a**.