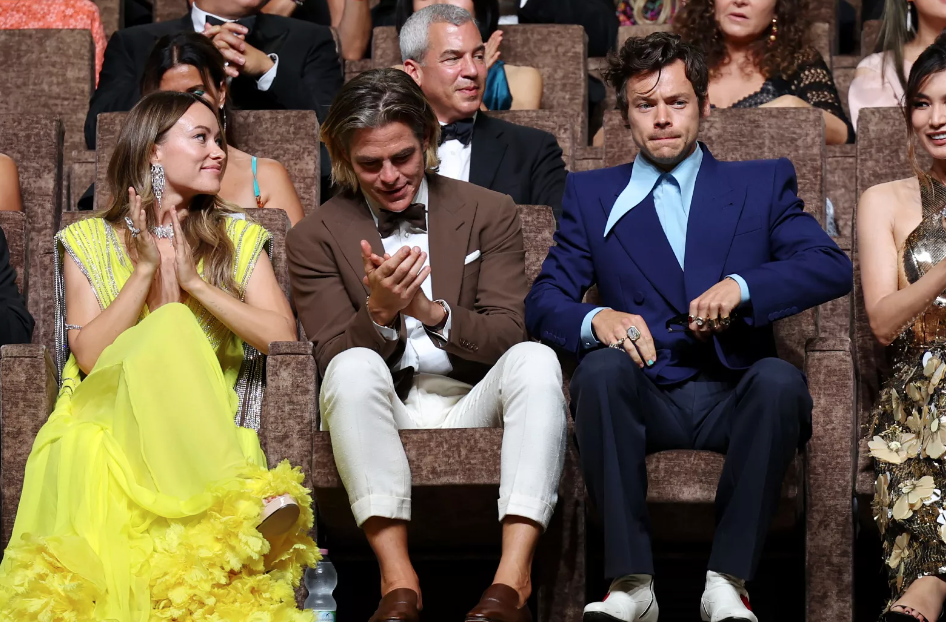 The drama surrounding Olivia Wilde’s upcoming film ‘Don’t Worry Darling‘ could probably fuel a whole documentary. The set was filled with drama from day one, from Shia LaBeouf being “fired” and replaced with Harry Styles, to Wilde herself falling for Styles during filming and divorcing Jason Sudeikis, to the alleged drama between star Florence Pugh and Wilde, and now possibly a feud between Styles and co-star Chris Pine?

Let’s explain that last one, because it’s truly the most bizarre. Chris Pine, Harry Styles and Olivia Wilde attended the premiere of the film at the Venice Film Festival this past weekend (Pugh did not attend).

And during the premiere, as the cast was introduced one by one in the theater, cameras caught a truly confusing moment between Pine and Styles.

In the clip below, you can see Styles taking his seat next to Pine. And initially, Pine is clapping for him, but then it looks as if Styles spits on him. You can see Pine stop clapping and look down at his clothing in disgust/shock.

#HarryStyles appears to spit on Chris Pine i won’t sleep until i know the truth pic.twitter.com/wLXjIHTYgU

Obviously we can’t say for sure what happened, but damn, it certainly looks like Styles spit. But at the same time, that would be such a bold move. Spitting on someone is a really low thing to do. If you spit on someone, that means you absolutely hate that person.

After the movie premiered, Styles was seen talking to Pine, and it seemed friendly enough, so it’s difficult to say what exactly happened here.

What do you think? Did Harry spit on him? Or is the internet searching for drama?