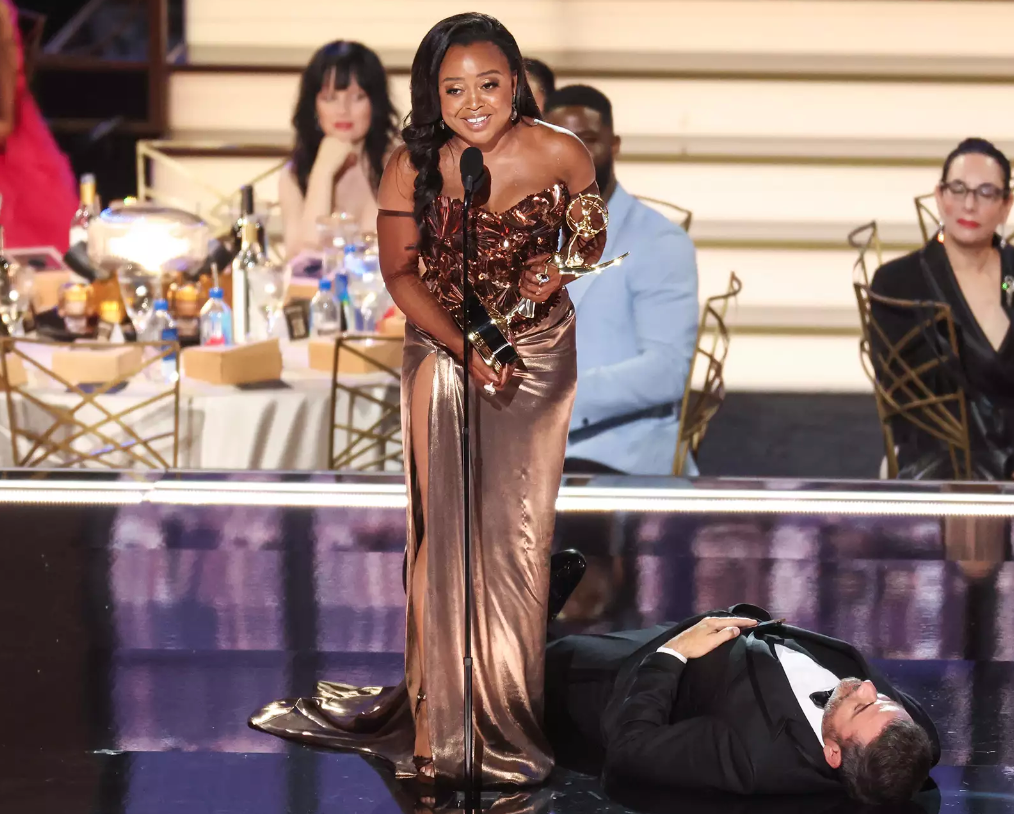 The 2022 Emmys went down last night, and for the most part, it was your standard celebration. There were no celebrities slapping each other, so I think that means it was a success.

But some fans wanted to slap Jimmy Kimmel for committing to a comedy bit while Abbott Elementary’s Quinta Brunson accepted her first Emmy. You see, before Brunson won for Outstanding Writing in a Comedy Series, Kimmel had just lost to John Oliver again in the best variety talk show category.

And as a joke, Will Arnett pretended to drag Kimmel’s passed out body on the stage.

Will Arnett dragged a seemingly passed-out Kimmel onto the stage, with Arnett quipping to the crowd that this is the ’13th time in a row that he’s lost and he just got into the skinny margaritas back there.’ When Brunson took the stage to accept the prize for her ABC series Abbott Elementary, which was her first-ever Emmy, Kimmel remained onstage.

That’s right. He committed to the bit. He did not move from his position during Brunson’s entire speech, so she was forced to address it.

And then she went on to give her written speech, but still, a lot of people felt like Kimmel took her special moment away from her. After all, it was her first Emmy.

She addressed the moment backstage when the press informed her people were upset on her behalf.

I think at that moment, I was just happy it was Jimmy up there. I kind of consider him one of the comedy godfathers. I’m a huge fan of Will Arnett. So I was wrapped up in the moment. Tomorrow, maybe I’ll be mad at him. I’m gonna be on his show on Wednesday, so I might punch him in the face. We’ll see what happens.

I see both sides here. Kimmel wanted to secure the bit. On the other hand, this was a special moment for Brunson, and he kinda stole the spotlight.