Kobe Bryant Allegedly Snatches a Dude up at Church! 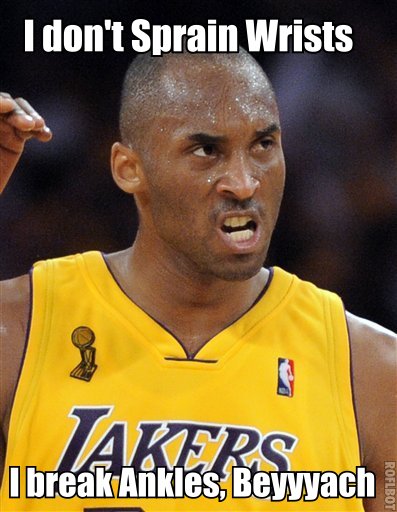 The Stress of the NBA lockout might have gotten to Kobe. It’s been a long time since we’ve witnessed any Kobe trouble (2004 to be exact), but this time it was protecting his family, not shaming them…but it happened at church.  D’oh!

Allegedly Kobe sprained a guy’s wrist.  The victim says that Kobe grabbed him up by the wrist and took his phone. Once Kobe realized that the guy hadn’t taken any photos, he returned the guys phone.  Done right? Wrong.

This bozo then goes to the hospital for treatment. Really?  Everything is a freakin’ pay day these days.  After the hospital visit, the guy filed a police report, and then said he wouldn’t be available for interviews until August 24, 2011.

He figures this will give people time to get a hold of him and offer some money for the story.  I wonder how big of a deal this will turn out to be. Hopefully nothing.  All we can do is hope by August 24, something bigger will be going on and we wouldn’t give a crap about this anymore.  I almost don’t care already.