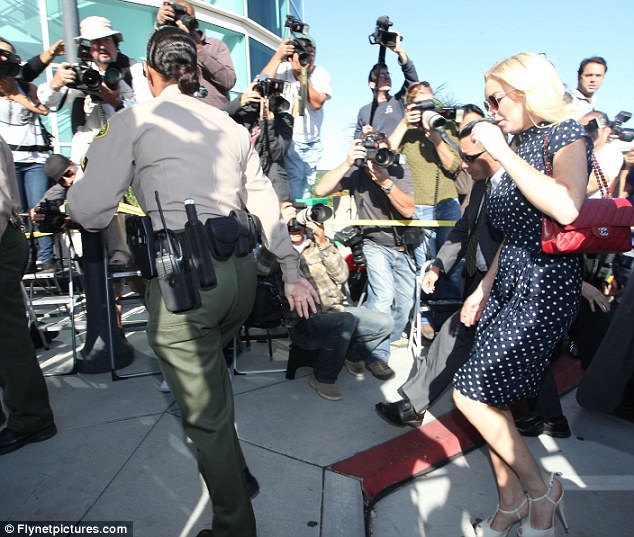 Is it November already? Wow does time go fast.

PLAYBOY FIRST!
Today was D day for Lindsay Lohan and she has been hit with 30 days!
Judge Stephanie “take no crap” Sautner said that Lindsay had to surrender by November 9th. The only reason she wasn’t taken into custody then and there, was so she can complete her nude Playboy shoot!!

Her lawyer, Shawn Holley finally earned her money. She petitioned on Lindsay’s behalf telling the judge that the Lohan was under contract with Playboy and had to finish the photo shoot, or she would be in breach of contract.

THE JUDGE IS NO JOKE!
Sautner continues to be unimpressed with Lindsay’s star power. She had no problem putting the actress in the slammer:

‘You are to surrender by November 9 and begin serving 30 days.
‘You will not be eligible for house arrest or electronic monitoring.
‘When you get out you will rep to the probation department and Ms Mansfield. Good luck to you with Ms Mansfield – she is no nonsense.’

She also has to spend almost every day working in the LA morgue. Sautner refers to the sentencing as
as putting the keys to jail in the defendant’s hands.’
Meaning, if she fails to comply she goes to jail for 270 days!!

All while never missing her mandatory psychological therapy appointments.

If she screws up – as my Dad used to say, “Her ass is Grass” (Still not sure what that means). In the judges own words,

‘If probation officer Ms Mansfield notifies me I will put a warrant out for your arrest,’

GULP! I think we all believe that. I’m starting to feel just a little bad for LL. But not too bad. Let’s hope she handles her business.
-COSMO