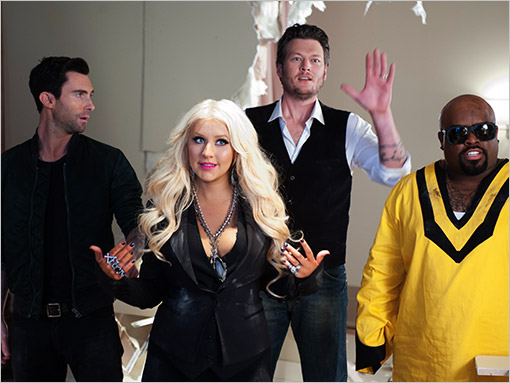 NBC’s The Voice will Air a Super Bowl Ad – Judges Will Be Doing Martial Arts! That’s right, you read it correctly, Cee Lo, Blake Shelton, Adam Levine and jumbo Aguilera will be doing martial arts, battling over the contestants that they want for their team.

Friday Night Lights director Peter Berg will be displaying his talents during a 60 second spot called, “Vokal Kombat”.  When the judges like a contestant, not only will they swivel their chairs around but during the commercial they will compete for the contestants themselves…physically.  They will be doing martial arts and using weapons in an all-out war.

“The Voice” will air after the Super Bowl and since it’s on NBC they can run the ad as a promo versus a commercial.  A 30 second ad during the Superbowl is going for $3 Million dollars so “The Voice” is getting a deal, you will never have better promotion then that.

The big game and the premier of “The Voice” will both be on Feb. 5th.

Here’s another behind-the-scenes shot of The Voice ad – Cee-Lo is looking like a Chocolate M&M in a Scorpion (from Mortal Kombat) costume.