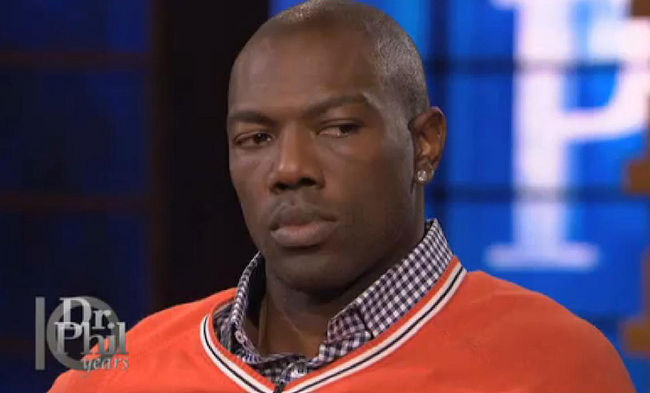 Terrell Owens on the Dr. Phil Show – Goes Head to Head with Three of his 4 Baby’s Mamma’s.

Terrell Owens must be really hurting for money these days.  He decided to take the hot seat on the Dr. Phil show and confront, not just 1, not 2 but three of his 4 “baby mama’s”.  Just as you would imagine, all of his children’s mothers were going hard on him.  His four children are of various ages by four different women and he pays out various amounts of child support for each – or at least he should be paying out.  The children and money allocation breaks down as follows:

Total – $50,000 per month in child support, a lot of money for someone who is not playing in the NFL.

The most interesting, albeit shallow part, is that we finally get to see how each of his baby’s mothers looks.  One of the mother’s looks old enough to be his mother, one is decent and “Kimber” is pretty much a certified milf.  Actually Kimber is hot and hot.  She calls TO out on several fronts and appears to know him the best.  When asked if Terrell was a good father she was honest and basically said no.  She said that her father was in the audience and that she knows what a good father is, so she can’t really say that Terrell is that.  She does not however deny that he loves his daughter.

When these women dated and had Owen’s baby, I’m sure they thought they hit the jackpot.  He has earned over 80 Million dollars in his lengthy NFL career and even 5 years ago he was contracted for millions to an NFL team.

Dr. Phil asked Owens if he lived a high life, TO responded,

I did, those were investment properties,that was at the height of my career when I was making a lot of money.

The cars that I had, I had some for myself but most of the cars they were for my family.  As far as anybody that knows me, they know I don’t live that extravagant life. Do I like nice things? Yes, you not going to see me Poppin bottle in the club, doing this that or the other where I am blowing a lot of my money.  People know that about me.

Just as those words are coming out of his mouth, you can hear Kimber laughing.  I guess she watched the TO Show too!

Here are some clips courtesy of Dr. Phil!  Enjoy