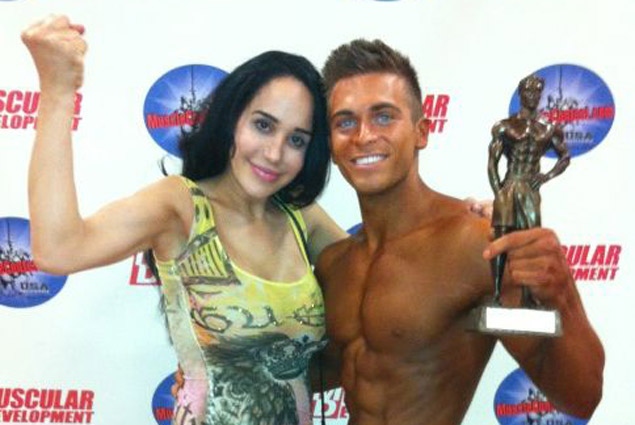 Talk about dating a kid with baggage.  If the guys on the Bachelor thought Emily Maynard’s daughter was baggage, what about 14 kids!

Apparently bodybuilder Frankie G does not care.  He is dating Nadya Suleman.  Not only does she have 14 children but she is 13 years her senior; almost a kid for every year.

Suleman and Frankie met in Church.  When asked if their age difference would be an issue Nadya didn’t think so at all.  She replied,

13 is also the number of years it’s been since Suleman say she’s last had a sexual relationship.  Yep!  She’s been celibate for 13 years.  Actually, she continues to insist that she’s never been on a date.  In an interview last year with HDNet she said that she has

“never been on one date in my life. I’ve had a boyfriend and a donor, but that’s it.”

Frankie G is currently an amateur bodybuilder, maybe if he turns pro he can help Nadya pay her bills.  Until then she has taking up the role as an adult film star.  Although she said at one point that she would never pose nude, after filing for bankruptcy back in April, desperate times called for desperate measures.  Suleman explained,

“If it’s a job, and it’s a well-paying job, and it’s gonna allow me to get out of here and move in a very safe, huge home that they deserve, I’m gonna do it,”

Now that her relationship is revealed let’s see how Frankie handles all the attention that comes with dating Octomom.  I have a feeling he won’t’ be around too long.  Just think – 14 kids for a 23 year old.  NO THANK YOU!