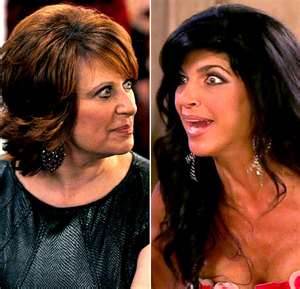 Did NJ Housewives’ Stars Skip Cancer Fundraiser Because They Didn’t Get an Appearance Fee?

Back in 2009 on The Real Housewives of New Jersey, Caroline and her family helped out Christopher DiMartino, who has been suffering from Cancer since the age of 3.  The Manzo’s during that time used their restaurant, the Brownstone to host a dinner that raised money for DiMartino’s cancer treatments.  It worked.

Now that funds are running low again, and Chris is six years old, another fund raiser is desperately needed.  The troops have been rallied and the fundraiser is set.  The event is being hosted at the Euro Lounge Café and P-Diddy has even gotten involved by having his company Ciroc supply the vodka…the only thing that would complete the fundraiser would be the attendance of two of the biggest NJ Housewives, Teresa Guidice and Caroline Manzo.

NO DOUGH NO SHOW

It is being said that the two will not show up at the event without their appearance fee.  When the two reality stars were contacted there was no response.  WTF!  A source told the daily news,

“They don’t do anything anymore unless they are getting paid, End of story.”

An appearance fee for the two could range anywhere from $3000, to $30,000; which for a Cancer fundraiser is out of the question.  All the money collected needs to go towards young Chris’ chemotherapy treatment.

When a rep for Caroline Manzo was contacted and asked what gives? Her response was simple,

She has never been contacted by these people

A rep for Theresa didn’t return my calls; I didn’t have enough money for her comment fee.  Like Will Smith says: Money and success don’t change people; they merely amplify what is already there.
[more…]