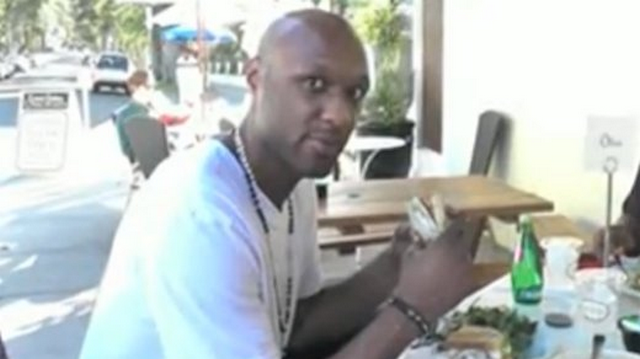 The Paparazzi Sit Down For Lunch With Lamar Odom

A paparazzo caught Lamar Odom a couple of days ago eating outside of a restaurant. At first, it looked like it was going to be a short video.

Odom informed the guy that he was about to eat, so he couldn’t talk. However, something kind of strange happened during the lunch date. The 33-year-old NBA star actually sat down and talked with the paparazzo for a few minutes about life, health and returning to the Lakers.

During the awkward interview, he told the cameraman that, “the only way you can become a champion is if you eat healthy.” We’re positive that Kobayashi disagrees with that statement, but let’s move on.

Odom then called the guy back to the table and talked about how great it was to be alive, “We’ll take things day by day. That’s all you can do. I’m alive. You’re alive. Does it beat the alternative?” He asked the paparazzo.

The stupid and nervous paparazzo didn’t understand the question, so Lamar Odom had to explain it to him three or four times. Seriously, you can go watch the video here and see the awkwardness for yourself. Eventually, the confusion was cleared up and Odom went back to eating his turkey sandwich.

But he wasn’t done talking! At the end of the conversation, the paparazzo wished Odom luck in his return to the NBA. Odom then replied with this truth bomb…

The video finally ends after almost four minutes with the paparazzo giving Lamar a high five and a weird hug, all while he’s trying to eat lunch. This interaction really shows you just how weird these camera guys are. It’s almost like they have never had a conversation with another human being before.

I suppose they are just nervous, but shouldn’t the celebrities be the nervous ones? After all, they are the ones being followed around by creepy men holding cameras. You would think that a paparazzo might want to know how to carry a conversation just in case this happens to them one day.