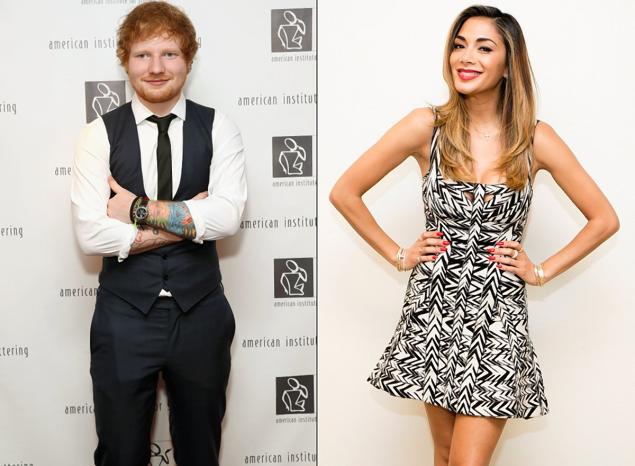 How many of you saw this one coming? According to multiple reports, Ed Sheeran and Nicole Scherzinger are dating. Apparently, the romance started for Nicole right after her breakup with Lewis Hamilton, who is now grinding his junk all over Rihanna’s booty. Sources say she listened to Sheeran’s latest album right after the split. She fell in love with his music.

“She was drawn to him over the last few months through his music. When she split from Lewis, she was heartbroken but ended up playing Ed’s songs on a loop.” One insider told reporters. They have been on a few dates, including a special date at a pub in Ed’s home town of Framlingham.

Back in July, the 37-year-old singer/dancer posted the photo you see below to her Instagram account. “Okay okay you win @edsheeran, you’re taller.” She captioned the photo. And on July 27, she allegedly dedicated a performance of Don’t Cha to the 24-year-old singer.

But don’t start making your, “I Support Sheerzinger” t-shirts just yet. Nothing is official. They are just having fun together right now.

As far as he’s concerned they were in the early stages of dating and he’s been open about it with close friends and colleagues. It may not develop beyond those dates but they’re definitely tight.

Strange stuff. I definitely didn’t see this relationship coming. It’s nice to see the roles reversed though. The older woman going out with the young superstar. I can dig it.

Wonder what T-Swift thinks about it?