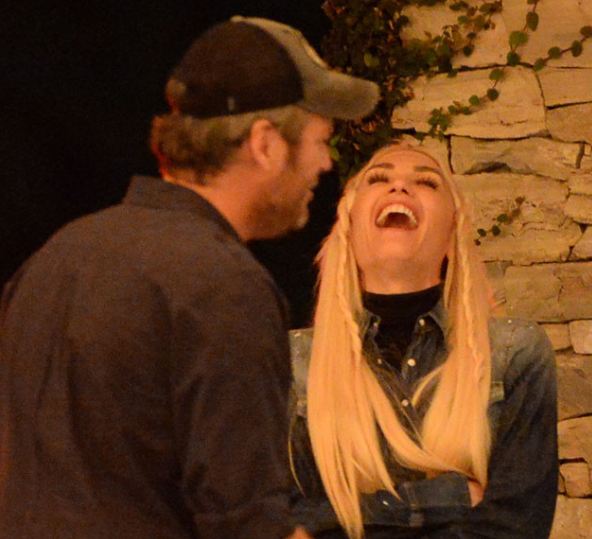 Looking For Proof Of Blake Shelton And Gwen Stefani’s Relationship? We Finally Have Photos Of The Couple Kissing! Even though it was pretty obvious to just about everyone that Blake Shelton and Gwen Stefani were dating, there were still some people who refused to believe the reports. Holdings hands, biting shoulders, and even basically admitting to the relationship in a few interviews wasn’t good enough for some folks.

Well, we have some photos that will change your mind. E! News was the first to release the photos you see below, which clearly show Blake and Gwen kissing each other. The PDA-filled night took place on Tuesday at a Mexican restaurant in Studio City, California.

Sources inside the restaurant claim the two stars couldn’t keep their hands off each other.

They were there with another couple and were waiting for valet for about five minutes. He kissed her twice and was pretty much grabbing her butt as he did.

That’s right, Blake was all over that booty! We are not sure if the margaritas were extra powerful at this restaurant or what, but it’s clear they were having a lot of fun together. At one point, Blake and Gwen even danced together while waiting for their car, “He was square dancing to amuse the group, and Gwen joined in for a bit, too.” Ah, yes. That’s when you know it’s true love, when you can square dance together. Another source inside the restaurant wanted everyone to know Blake and Gwen were great customers.

We’ll see where this relationship goes, but it’s looking like it could be the real thing. They look SO HAPPY together, it’s a little nauseating.

What do you all think? Do you approve of Gwenton? By the way, I guess these photos don’t actually prove they are in a serious relationship. Blake Shelton has been photographed trying to kiss a lot of people.