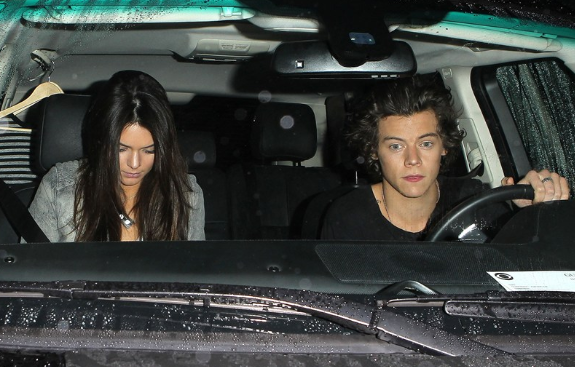 Kendall Jenner & Harry Styles: On Vacation TOGETHER. We Got Some Blurry Photos!

We are positive there are millions of girls around the world who would LOVE to kiss Harry Styles this New Year’s Eve. Or I guess the kissing would technically be on New Year’s Day, right? Since you don’t lock lips until after you shout, “THREE…TWO…ONE…HAPPY NEW YEAR!”

But the point remains. Girls want to kiss Harry Styles; however, it looks like Mr. Styles might already have a special pair of lips ready to go. The 21-year-old pop star is currently on vacation with Kendall Jenner on the British Island Anguilla in the Eastern Caribbean. They have reportedly been doing several fun activities together. On Tuesday night, fans spotted them eating dinner together at a restaurant called Blanchard’s. Unfortunately, the photos that were snapped appear to be from 1995. I mean, yeah you can tell it’s Harry and Kendall, but that’s only because their faces have been shoved down our throats for the past two years.

Some lucky fans were able to snap a photo with Harry at the restaurant. Oddly enough, they all appear to be looking in different directions. Fitting, huh? R.I.P. One Direction </3 Another fan at the restaurant sent out the tweet you see below. It’s clear she was REALLY excited about eating dinner next to Harry and Kendall.

So what does this all mean? What are the FACTS we should be focusing on? Well, let’s make a list and go over them together.

Those are the facts. We also know the two stars were linked together back in late 2013/early 2014. They went out to eat several times, took a snowboarding trip together and even went to a concert together. But they never did confirm they were dating.

In fact, Kendall went on her Twitter account at the time to say, “Enough with the rumors! I’m single, people.”

We’ll see what happens this time.