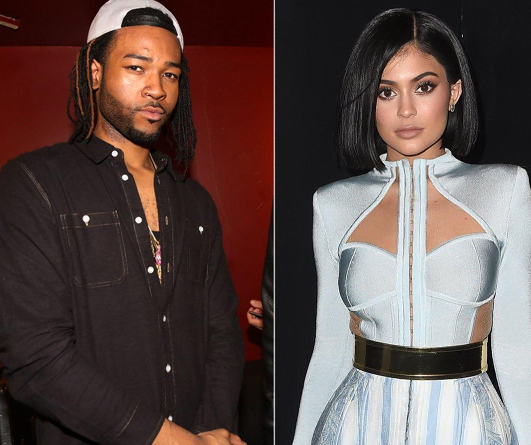 Well, that was fast. Just a few weeks after breaking things off with Tyga, Kylie Jenner has found herself a new rapper with an equally bizarre stage name. Sources claim the 18-year-old reality star is now dating PARTYNEXTDOOR.

Mr. Door’s real name is Jahron Anthony Brathwaite, and that’s what we’re going to be calling him in this article, because I really don’t feel like typing PARTYNEXTDOOR again. I mean, does Kylie call him that? When they’re making reservations at Chili’s, does he make the staff put down PARTYNEXTDOOR?

Like, “PARTYNEXTDOOR…YOUR TABLE FOR TWO IS READY!” and all the customers are confused and thinking, “What? How are all those people at the party going to fit at a table for two?”

Okay. I’m sorry. I took an unplanned journey there. Let’s get back to the story. The romance rumors between Jahron and Kylie started just days after she broke up with Tyga.

Jahron posted the photo you see below to his Instagram; showing off his wrist bling next to Kylie’s. He tagged her in the photo and captioned it, “Diamond battles with Kylie Jenner.” This seemed to upset Tyga. He responded on his Instagram account by posting a photo of his own wrist, which was decked out with a ridiculous amount of bling. He also captioned the photo “Diamond Battles,” so it looks like someone is feeling a little salty. Maybe a member of his crew should get him a glass of water.

According to untrustworthy sources who talked with The Sun, Kylie’s relationship with Jahron is heating up fast, and she doesn’t know why she wasted so much time with Tyga.

Their relationship started quite suddenly but it just feels right. They are mad for each other. She doesn’t know why she wasted time with Tyga. Kylie’s family found the eight-year age gap with Tyga a bit weird, especially as they got together before she turned 18 last year. PartyNextDoor is much better as he’s only four years older than her.

There you have it, folks. You can go on with your life now. You’re welcome.