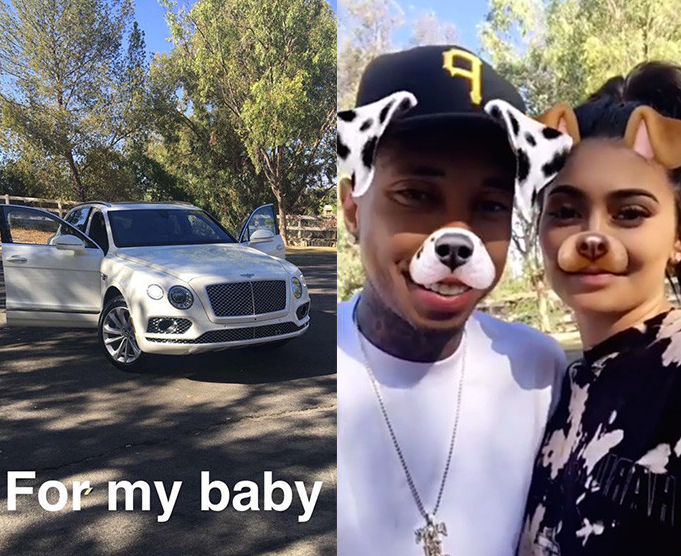 Kylie Jenner Saves The Day, Surprises Tyga With A New Bentley After His Ferrari Was Reportedly Repossessed…TRUE LOVE!

Ah, yes. A relationship formed on expensive jewelry and fancy cars is a beautiful thing. If it seems like Tyga and Kylie Jenner are surprising each other with new cars every 1-3 months, it’s because they are. Tyga surprised Kylie with a car for her 18th birthday and her 19th birthday.

And that was super sweet of him because he wasn’t even able to keep up with the payments on his own car. Or at least that’s what everyone thought. Earlier this week, his precious Ferrari got repossessed. The repo man reportedly showed up armed with a spare key. The reports claim Tyga missed a few of his lease payments.

He was forced to call one of his friends to drive him home, which had to be a little embarrassing. It’s not a good look, and Kylie Jenner knows this, so she decided to surprise her 26-year-old man with a new Bentley on Wednesday.

Kylie shared the special moment with her fans on Snapchat, and she explained that TMZ almost ruined the surprise…

So, fake stories came out today. The blogs almost ruined it and said me and T were at the Bentley dealership when really it was only me. And I had to lie to T and say, ‘I have no idea, T, what the story is. I was not at a Bentley dealership.’ But I was!

So yeah, it looks like TMZ’s story was complete bullsh-t. As you can see in the series of Snaps above, Kylie was the one who took Tyga’s Ferrari. I mean, I guess it’s possible she’s just trying to cover her boyfriend’s ass, but that seems unlikely.

In any event, Tyga has himself a new toy, and his hollow relationship with Kylie is safe for at least another month. I wonder how many marriages could be saved if everyone had the money to buy their significant other a new car or house every time something bad happened.