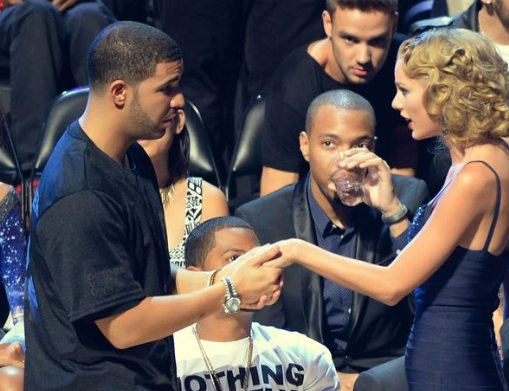 The Swirl Is On: Drake Has Been Buying Lavish Gifts For Taylor Swift’s Pussy (Cats) And It’s Working Drake has been playing the game long enough. He knows the fastest way to a girl’s heart is through her pussy…cat. According to multiple sources, Drake stopped at Petco the other day and went “buck wild” on cat accessories and toys for Taylor Swift’s cats.

The sources add that he’s also going to send her…

“This sick designer bag that she can put her cats in when she’s traveling. He knows how much she adores her cats and Drake wants her to know that he adores her just as much.”

If you’re confused right now, we completely understand. A little over a week ago, we did our best to shut down these Swift/Drake dating rumors by explaining why they have been hanging out so much recently. They’ve been in the studio making music for an upcoming album.

And at the time, it appeared to be strictly business; however, now it looks like we’re starting to see the fire behind all this smoke. We’re not ready to confirm they’re dating, but we are saying it’s looking more likely. Last week, Drake posted this image of himself standing next to Swift at his b-day celebration. Honestly. I can’t handle a world where Donald Trump is president and Drake and Taylor Swift are dating. It’s too much. I can handle one of those events, but not both at the same freaking time. It ain’t right.

So either Trump needs to come out and admit he’s been trolling us all, or these sources need to admit they are making all this sh*t up.